Brian Jungen was born in British Columbia, Canada and graduated from the Emily Carr Institute of Art and Design in 1992. As a teenager he became interested in his Native American heritage having a Dunn za Mother and a Canadian Father. He went on to become the first living Native American artist to exhibit at the Smithsonian National Museum of the American Indian in Washington, D.C. He works in opposites, creating works that are described as fake and authentic, playful and political, common and extraordinary.
Brian Jungen  is a  sculptor known for his deconstruction and remaking of mass produced objects such as Nike shoes, plastic chairs, expensive leather golf bags, baseball mitts, leather goods and contemporary designer chairs amongst others.
He is kalso nown for his ability to change everyday ordinary and sometimes luxury items and recreate them into unusual artpieces thereby changing the nature of the original object moving towards an artwork rather than a useful functional object. 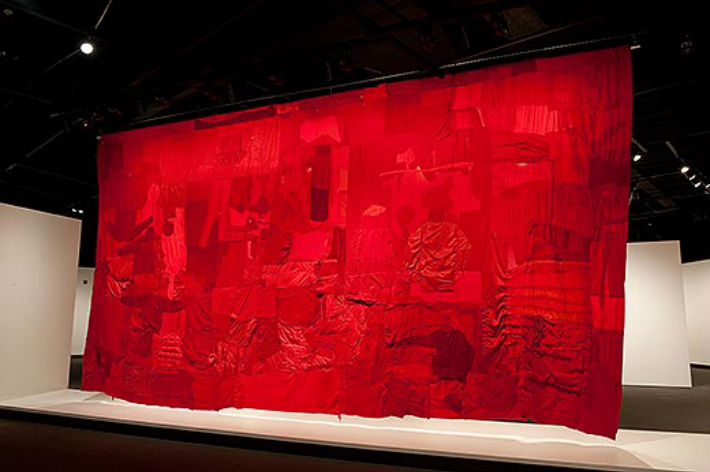 Peoples Flag 2006 from One man's trash is another man's treasure Canadian, 1970 textile materials, natural and synthetic fibres 452 x 904 cm irregular Purchased 2006 with the support of the Audain Endowment for Contemporary Canadian Art of the National Gallery of Canada Foundation National Gallery of Canada (no. 41947)
Brain Jungen's artwork I did not like on first glance when I began this research project but after considerable work on other contemporary artist 's I returned to his art and decided  I now can apprectiate his work. He has a gift for utilising the mundane objects that others may throw away and making meaningful statements about them through his artistic endeavours. He has been described as having an ability to transform everyday objects into native American artwork bridging the gap between indigenous and mass scultpures (Gambino 2009) His approach is at once subtle and provokatively political in a country such as the USA to make any sort of statement about the national sport of baseball is radical indeed. He manages to simply use objects to create art such as Nikes, baseball mitts and golfbags with a playful carefree attitude almost as if he were an alien and did not know what the majority of people use Nikes and golfbags for in the US.
The image above "Peoples Red Flag"  I think it is my favourite of all the art seen over the past few weeks. It is a collaborative work where people came together to make a patchwork flag out of second hand clothing it was assembled on site in the gallery space of the Tate Modern in a time-consuming process wherein Jungen and others stitched together an assortment of textiles including hats, bags, and clothes. The labour involved in the flag’s construction is part of the completed work, so becomes a statement on mass production and the inequality in conditions between those who make consumer goods and those who demand them.  It is meant to be based upon the Irish political activist Jim Connell’s late nineteenth-century worker’s anthem “The Red Flag” as well as the protest banners of environmental activism- courtesy of  http://www.gallery.ca/en/see/collections/artwork.php?mkey=188487
The aspect of my research I also enjoyed was listening to Brian Jungen 's softly spoken voice  discussing the use of old leather from couches to make drums that reflect his upbringing and heritage as a Native American from Dunne-za Indian tribe in Canada  National Gallery Interview with Brian Jungen 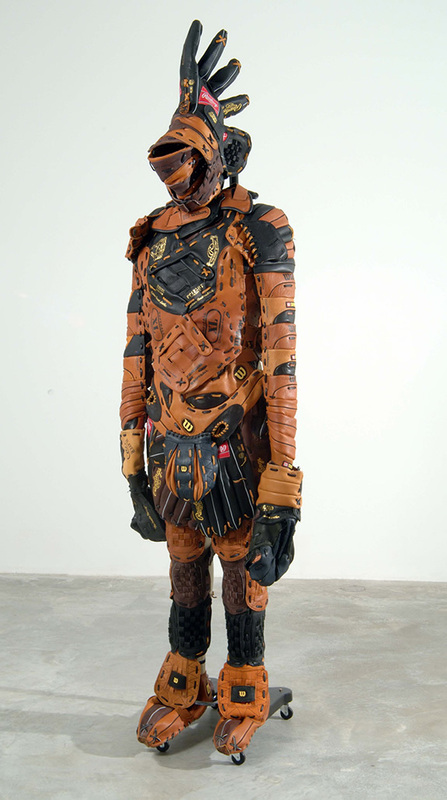 "The prince" 2006 courtesy of Casey Kaplan http://nmai.si.edu/exhibitions/jungen/works.html One man's trash is another man's treasure 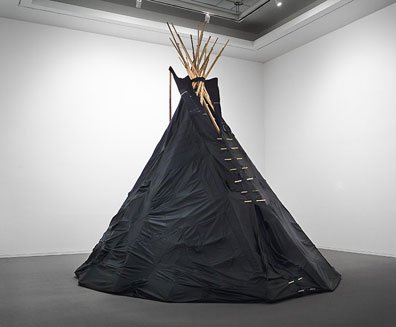 Furniture Sculpture (2006) Natuzzi sofas, wood.
"I experiment until I can find a way I can manipulate them [the source material] or take advantage of their iconography, without completely changing them. I like the fact that people can still recognize what the source material is." BJ 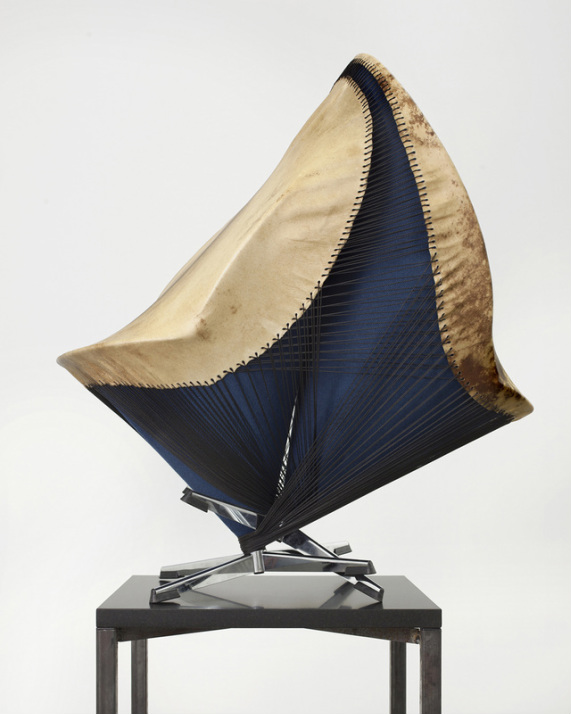 Casey Kaplan Gallery 2011 My Decoy Photo Cathy Carver https://www.artexperiencenyc.com/brian-jungen-at-the-casey-kaplan-gallery/
There is definite theme in sections of Jungens work based around American baseball culture. As shown above in the slideshow his works of catcher mitts, blankets woven out of uniform jerseys and totem poles is his deliberate statement to make art from an industry that for decades has exploited the Native American names for example The Redskins, the Braves and the Chiefs etc.
"I felt that if these professional sports teams felt that they had every right to use this terminology, then I had every right to exploit their materials for my artwork," Jungen 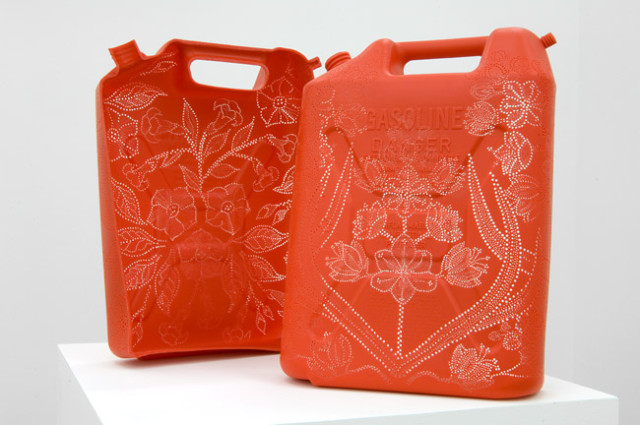